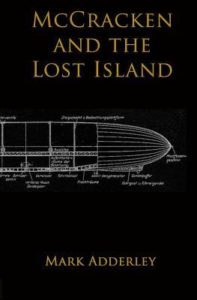 This is the first book in the McCracken series by Mark Adderley. I’ve heard this series described as “Indiana Jones with a rosary” and that is a great description. This delightful book is perfect for middle school and high school boys who love adventurous novels. It is set in the 1930’s with an interesting group of international characters including the English engineer/inventor McCracken, the lovely Ariadne – a communications expert with an interesting past relationship with McCracken, a French deep sea diver, a Russian pilot and a rich German Baron who gathers them all for an adventure to find a lost island. I thoroughly enjoyed the exciting plot which reminded me of the movie version of “Journey to the Center of the Earth”. McCracken’s strong faith and engineering genius makes this character a fantastic role model for teens.

Seeking adventure? Look no further! The year is 1913: the place, Europe. McCracken, inventor, engineer, big-game hunter and faithful Catholic, tells the stories of his adventures in a series of novels made for everyone who loves adventure–but especially for boys. McCracken and the Lost Island is an adventure beneath the waves and atop a hidden land. The team assembles: Ariadne Bell, communications expert; Nicola Jaubert, deep sea diver; Vasili Sikorsky, airship pilot; and “Mac,” McCracken, inventor and engineer. Together they find the lost island–but will its secrets prove too dangerous for a world at the edge of war?