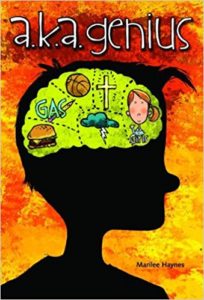 a.k.a. Genius by Marilee Haynes

I loved this book! What a delightful middle grade book about finding yourself and fitting in. The story follows Gabe, a middle school student – smack dab in the middle of those difficult awkward years. Oh, and he just found out he’s a genius.

I’ve never read the Diary of a Wimpy Kid books but this novel reminded me of the movies. A young boy making his way through the difficult years of middle school, in a humorous story with colorful characters. I was about halfway through the book when I was out of town and unable to read for a few days but I couldn’t get Gabe, his friends and their predicaments out of my mind.

Haynes is a fabulous writer who expertly captures Gabe’s voice. Though this book is fun it also has some powerful moments and inspiring messages. Warning: you many need to keep some tissues nearby to wipe away the tears of laughter and sadness.

I highly recommend this funny and touching book.

Thirteen-year-old Gabe Carpenter is just like any other middle-school boy at St. Jude Academy…well, except for the fact that based on his scores on some seventh grade test, he is considered a “genius” and is placed in an enrichment class with other gifted students. But he sure doesn’t seem like a genius-after all, he can’t even open his own locker and his brain stops functioning when Becca, his sister’s best friend, comes around.
As if these problems aren’t enough to deal with, he is convinced that one of his arms is longer than the other, he’s still waiting for signs of puberty, and his second best friend is mad at him. Even worse, his nervousness causes some pretty embarrassing bodily functions. And at home, his dad expects him to be some kind of basketball star athlete instead of a science nerd who predicts the weather.

Join Gabe as he navigates the trying times of middle-school, wonders what it means to have brains, and learns what it truly means to be himself.

Themes include: self-acceptance, giftedness, and humor.