This page contains spoilers and is meant for people who have read Where You Lead and are curious about the writing process.

The idea of “Where You Lead” started as a momentary incident that happened years ago when my husband and I were first married. We had recently moved to Washington DC from Colorado and one afternoon we were eating at a Pizza Hut restaurant. I was returning to our table from the restroom and saw my husband sitting at our table. His back was to me so I only saw his dark hair. For some reason, I thought about other Pizza Hut’s I had been in throughout my life and how they all looked the same. And I thought, wouldn’t it be crazy if I sat down and instead of looking up and seeing my husband’s face it was actually someone from my past, and all the amazing memories I had of us dating, getting married, and moving to DC, had never happened.

This, I thought, was the beginning of a great novel. I pictured it more as a novel for adults – the leading character abandoning her life and searching for this mysterious stranger that she was sure existed. But since I wasn’t a writer back then, I just stored this thought away.

Fast-forward many years to after my first novel, “The Perfect Blindside”, was published. This story idea was still rattling around in my head, but I couldn’t figure out how it could possibly be made into a YA novel because there was no way a teenager could drop everything and search the country or world for a mysterious stranger. I again put the idea on the back burner and began writing my second novel, “An Unexpected Role”. But that little spark wouldn’t leave me alone.

Finally, a few ideas on how to change it up and make it work for YA began percolating in my mind. I decided to set the story in Washington DC, since that is where I first had this idea. I began jotting things down in one of my daughter’s old notebooks. (I’ve kept this notebook and it has been fun to look back on my notes and thoughts.) 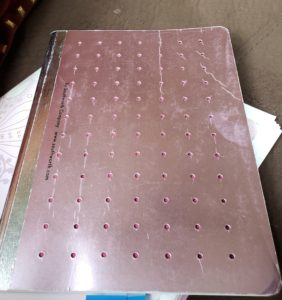 The notebook includes lists of places that I had loved when we lived in DC. As I began thinking about those years when we lived inside the beltway, so many memories came flooding back. I still could remember those feelings as young newlyweds when living on the east coast, and especially DC, felt like a different world from out west. But we loved our time there. The history, the old buildings, the civil war battlefields, it was all so fascinating. In this book I’ve not only included our favorite places but also some of the quirky things and incidents that we encountered.

Some of the grand old houses around Georgetown seemed like a great setting to include in the story. I started researching some of the manors, museums and embassies searching for some interesting history. When I discovered that the Luxemburg Embassy was built for a lumber baron and that they had given a sculpture to the Kennedy Center named Ascension (what an intriguing name), some pieces of the puzzles started to fit together. But I didn’t want to use an actual country, so created a new one – Endelbourg and name for the sculpture (Uprising).

One of the exciting ideas that came to me had to do with the symbol that my characters were searching for. I thought of many different symbols to use as a connection between the keepers of the confederate gold and finally decided on the triangle. At first, I thought the gold would be at the Embassy and the Smithsonian and couldn’t decide where the third place would be. Then it dawned on me to use the triangle as a map. I printed up a map and using a ruler plotted my points trying to find a good third spot. A possible third location became Roosevelt Island. But two things seemed wrong with that. Being on the island didn’t seem very exciting and the triangle point would be really hard to figure out. 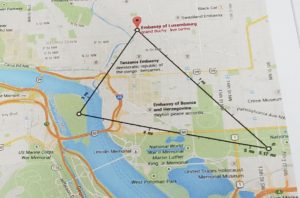 Then I decided the only way my character could figure out a third location would be to make it a perfect triangle. Again, I printed up a map, plotted the first two locations and created my angles to find out where the third location could be. Unfortunately, it landed right where the Metro line would be by Arlington Cemetery. 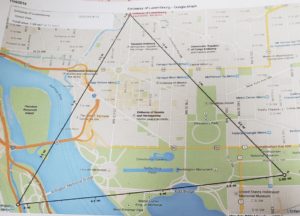 But I liked the idea of having it in Arlington, this would be a third spot that hadn’t really changed much since the Civil War. So, I went back to the drawing board. Where could my starting point be? Scouring the map, I found the perfect spot. Oak Creek Cemetery, which had always been one of my favorite spots. This change made the triangle shape work. You have no idea how exciting this was! 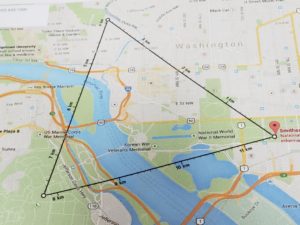 After that everything else began to fit together.