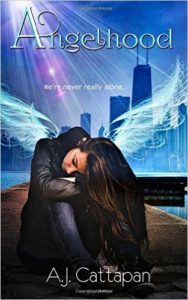 Angelhood by AJ Cattapan is a captivating YA novel that tackles an extremely difficult subject while putting an intriguing and heartfelt twist to it. Cattapan is a talented writer who has effortlessly created a story about teen suicide which is moving, positive, and uplifting. This hard to put down book encourages readers to think about the good in their lives and how much they’d miss it if they did the unthinkable and gave it up. The lead character is completely relatable and likeable, as readers we empathize with the despair she feels in her life as well as the painful realization of the damage her decisions have on others. The novel’s intriguing premises and subplots are the perfect elements to generate great discussions. I only wish I had known someone else who had read it because I had so much I wanted to debate and talk about. This is a truly exceptional novel.

Seventeen-year-old theater geek Nanette believes her life is headed toward stardom on Broadway. But when her dream theater college rejects her and her best friend dies in a terrible accident, Nanette decides the world would be better off without her. Unfortunately, the afterlife offers something less than a heavenly situation. Trapped between alternating periods of utter darkness and light, Nanette is stuck following a high school freshman around. Soon, she learns she’s a guardian angel, and the only way she can earn her wings is to keep her young charge, Vera, from committing the same sin she did—taking her own life. Unfortunately, Nanette is missing more than just her wings. She has no tangible body or voice, either. Frustrated by her inability to reach out to Vera and haunted by memories of her old life, Nanette wants to give up, but then she sees what happens when another Guardian at the high school turns his back on his charge. The shock is enough to supercharge Nanette’s determination. She’s going to find peace in the afterlife…as soon as she can convince Vera that living is what life is all about.