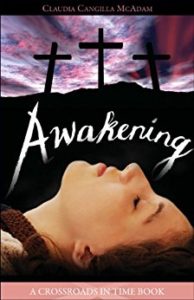 Awakening by Claudia Cangilla McAdam is one of those books that is hard to set aside. While reading, I had trouble putting it down, wanting to know what would happen next, and found myself wanting to read just one more chapter after one more chapter. Even after I finished the book, my mind couldn’t put it aside, thinking about this powerful and imaginative story long after I devoured it.

Much like the movie it often references, The Wizard of Oz, the story is of a young teenage girl who finds herself waking up in another world, wondering how to get back home. Awakening is the story of Ronni, a contemporary teenager who find herself in first century Jerusalem, days before Jesus is betrayed and crucified.

This compelling story is such a unique and moving way to view the Easter story that I think will appeal to teens. The author seamlessly adds entertaining, modern items that teens will relate to – tenuous friendships, unrequited crushes, complicated relationships with parents – with the Passion story, creating a hard to put down novel.

I loved the many elements highlighting the time period, the historical details of Jewish and Roman culture, and experiencing firsthand what the disciples might have felt. Just when you think you know what will happen some unique twists are thrown in to keep you wanting more, while keeping to the facts of this Holy event.

A must read this Easter season.

Fear drives me forward as I rush down a rocky path in Jerusalem, trying to sort things out even as dusk makes it harder to hurry. Am I really an American girl, cast back to the time of Jesus? Or a delusional Jewish teen, plagued with visions of a place called America, thousands of years in the future? I don’t know anymore. But I do know that something awful is about to happen to my Jesus: they’re going to arrest him tonight, and kill him. No one believes me; they think I’m crazy. So it’s up to me to save him, hurrying down this dark path toward Gethsemane, toward the turning point of all history, the attempt to kill Jesus . . . toward the uncertainty of whether I can actually manage to change the future.