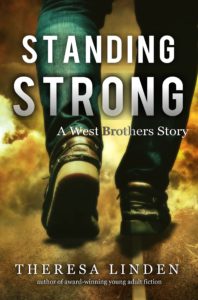 I’m very excited to post today about Theresa Linden’s newest book – Standing Strong  , the next chapter of the young adult West Brothers series comes out on the Feast of St.Francis, October 4th.

Theresa is offering a giveaway until October 4th, for a chance to win a copy of this new YA book.

Theresa Linden is an amazing talent in Catholic teen fiction. I’m a huge fan of her writing and her ability to completely draw the reader into the moment with her outstanding descriptions. Her newest novel, Standing Strong is the next chapter in her West Brothers series.

There are a few things that make this series for older teens, very special. First, these powerful books are all written from slightly different perspectives, whether from one of the three West brothers – Roland, Jarret or Keefe, from a friend – as in Life-Changing Love, or, as in Battle for His Soul – the demons and angels that are constantly battling around us. Her newest chapter in this series, Standing Strong focuses on Jarret and Keefe West, the twin brothers who are struggling with very different aspects of their faith.

The other element that makes this series unique is that it is one of the few books I’ve found in the Catholic genre that is written for teen boys. Books for middle school age boys are prevalent but, gripping, character driven books for High School boys are more difficult to find. Don’t misunderstand though, Linden does such an amazing job of writing from this perspective that any teenager would enjoy and be moved by these books.

Linden has perfectly captured the heart and soul of the tough Jarret West in this new novel. During the first book, Roland West, Loner, I couldn’t stand his older brother Jarret but as the series has continued, Jarret really developed into a fascinating character. This character that I loathed, transformed into one that I found myself rooting for. He’s made lots of mistakes, did many horrible things, treated people badly, but in the end, realized his mistakes and the importance of his faith. Standing Strong finds Jarret struggling to keep his new found faith focused and strong, while his twin brother Keefe searches for answers to his own calling.

When authors write a series, they hope that all the books will be intriguing and connect with their readers. Linden has not only mastered this goal with her West Brothers Series, but as she’s continued with this powerful family saga, each book has been better than the last. Standing Strong is by far her most powerful and gripping book yet. I devoured this novel, needing to find out what happened next.

When the path is not clear…

When temptation is near…

When God speaks in a whisper you can barely hear…

Ever since that life-changing night in the canyon, Jarret has felt the presence of the Lord in his soul. Now that presence is fading. Is it his fault? How will he remain faithful without it when he still struggles against the same temptations?

​Questioning whether he has a true calling, Keefe reads everything he can about St. Francis and the Franciscans, but he’s afraid to talk to his father about an upcoming discernment retreat because his father seems closed to faith. Is he ready to go all in?

“Another chapter in Theresa Linden’s masterfully-developed series for teens that will resonate with everyone who has struggled to find his place in the world, been tempted to take the easy way out, or doubted the work of God’s hand in his life. A realistic portrait of the slow and subtle work of grace in our lives.”

“Standing Strong refutes one-dimensional stereotypes and redefines the power of Bro. Recommended for teenage boys as well as for anyone who would like to fathom their world.”

“Linden is a master at getting inside the heads of today’s teenagers, and her own deep faith and love of God shine through and inspire on every page. After readingStanding Strong, your own spiritual life cannot but be strengthened, making you also want to stand strong for God. Highly recommended!”

~Susan Peek, author of St. Magnus, The Last Viking and many other saint stories for teens and children

“Standing Strong is a beautiful testament to how God works—in the whispers, in the quiet moments, in the gentle guidance of our hearts. It’s a reminder that Jesus is with us in ways we may never understand, and that, if we allow it, the Holy Spirit will give us the strength to stand strong for God!”

“It’s not easy to reinvent yourself while you’re still in high school, as Jarret West discovers as he seeks a way to turn his life around after an intense spiritual experience. His twin brother couldn’t be more different: Keefe contemplates joining the Franciscan friars. Theresa Linden recounts twin spiritual quests in her newest novel, Standing Strong.”

Theresa Linden is the author of award-winning Roland West, Loner and Battle for His Soul, from her series of Catholic teen fiction. An avid reader and writer since grade school, she grew up in a military family. Moving every few years left her with the impression that life is an adventure. Her Catholic faith inspires the belief that there is no greater adventure than the reality we can’t see, the spiritual side of life. She hopes that the richness, depth, and mystery of the Catholic faith will spark her readers’ imagination of the invisible realities and the power of faith and grace. A member of the Catholic Writers Guild and the International Writers Association, Theresa lives in northeast Ohio with her husband, three boys, and one dog.

Sign up for my News, Clues and Reviews updates!